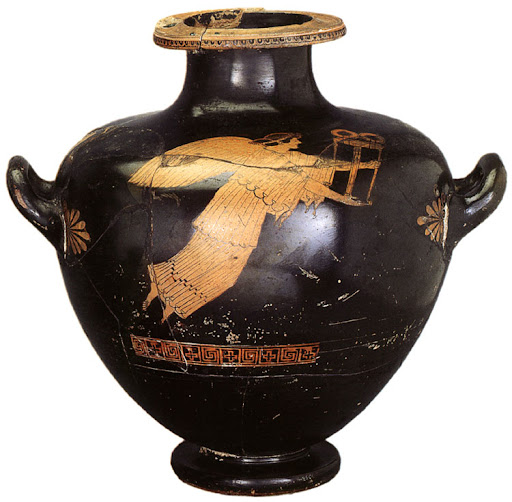 From the 5th century BC, the four panhellenic festivals of the Olympia, Pythia, Isthmia and Nemeia were the places of pride for the περίοδος, an agonistic circuit intended to be fully attended by athletes. Artists skilled in music and poetry could partially show off along this panhellenic route (Pythia, Isthmia and Nemeia), though the Olympian games were reserved for physical contests. In an attempt to fill a void, the incomplete περίοδος of professional musicians and poets was compensated with newly-founded competitions that, from the 1st century AD onwards, are mentioned in the catalogues of the periodonikai just after the classic περίοδος. The ἀρχαία and the “νέα περίοδος” (according to a modern expression intended to invoke the new Imperial contests of Kapitolia, Eusebeia, Sebasta, Aktia, and Heraia) have been recently reconstructed as two distinct circuits along which the periodonikai used to differentiate their victories. But they are to be considered as the culmination of a process. In between, there is the agonistic floruit of the Hellenistic period, attesting to a gradual, but fluid and dynamic, re-elaboration of the concept of περίοδος with festivals and artistic kermesses hosting itinerant virtuosi. Inscriptions support and enhance this partial vision.

Starting in the first decades of the 4th century and increasing remarkably through the course of the Hellenistic period, the catalogues of participants and victors at musical-poetic and dramatic contests indicate that agonistic trips combined various stops: they show a much broader phenomenon of movement throughout a wider range of festivals than the traditional περίοδος we are used to envisaging. A remarkable number of artists  were engaged in trips that encompassed segmented or more ample circuits, as mainly attested by the inscriptional records of the ἀγῶνες. A general consideration of the sources suggests that a crowd of freelance artists, possibly tied to agreements with contractors, and professionals, affiliated with the major artistic guilds, traveled along branched circuits that embodied a scenario alternative to and richer than the actual περίοδος. These circuits could be ample and rich routes throughout prominent festivals with the aim of achieving the periodonikai fortune, as in the Athenian dramatic contests or the Delphian Pythia; they could be cultural exchanges among cities that staged kindred events, as with the Rhodian contests arranged in the wake of the Athenian dramatic festivals; they could be delimited circuits: those rooted in localism, as with the Boeotian route where artists traveled throughout their region; or they could be the routes defined by cultural affinities and historical correlations, as with the threefold route Athens-Delos-Delphi. Through this lens, the artistic guilds of the τεχνῖται of Dionysos enter the picture its earliest stages. The agonistic catalogues mainly attest to routes defined by two or three stops, no less remarkable than the wider circuits as they provide valuable information about artistic segments commonly attended by groups of virtuosi in specific time ranges. So far, our database includes the records extrapolated from the epigraphic lists of participants and victors at the Delian ἐπιδείξεις and ἀγῶνες τῶι θεῶι, the Delphian Soteria, and the Boeotian contests. More will soon be added, but there are enough already to gain insight into the artistry shaping cultural life on the ground.